Costa Rica has disclosed the date and progress of the PreCOP 25 agenda, which precedes the Conference of the Parties to the United Nations Framework Convention on Climate Change (COP25), to be held in Chile in December.

The event will take place on October 8, 9 and 10 at the National Convention Center, and will position the country as both a global climate leader and one committed to multilateral processes.

This is envisioned as a key space following the Climate Summit convened by the Secretary-General of the United Nations in New York in September of this year.

«Costa Rica is convinced that the PreCOP should be part of the global climate milestones of 2019 to assist in the achievement of positive results at COP25 and, above all, to increase the ambition of climate action, allowing us to meet the goals of the Paris Agreement agreed in 2015 and respond to the greatest challenge facing humanity,» said the President of the Republic, Carlos Alvarado.

Although normally organized by the country presiding over the COP, this year’s PreCOP will be different, as Costa Rica and Chile have jointly agreed to organize these two meetings and thus allow them to be held in Latin America, following Brazil’s refusal to host the event.

«Organizing the PreCOP is a great opportunity for the country, since it allows us to establish ourselves as leaders and as a laboratory for decarbonization and resilience, enhancing the possibilities for the country to receive investment and cooperation in the area of climate financing. The continued consolidation of our Country Brand and our territory as a special tourist destination is equally important», President Alvarado explained.

The event will be attended by around 600 people, including heads of delegations from various countries around the world, as well as international and national leaders and representatives from the private sector, academia, NGOs, municipalities and the financial sector, among others.

This is the time to strengthen actions and solutions

At COP24, held in Katowice, Poland, the Paris Agreement Work Program (PAWP) was defined as a relevant milestone for the operationalization of the Agreement, establishing a framework for enhanced climate action.

This PAWP, however, left the negotiation open with respect to Article 6 of the Agreement, which concerns Carbon Market Mechanisms and which should ideally be finalized at the COP in Chile.

It is for this reason that, for this PreCOP, Costa Rica has proposed the promotion of ideas and positions as well as the exchange of experiences regarding possible solutions in order to accelerate the decarbonization and resilience of differenteconomies.

«Costa Rica’s intention with the PreCop is to concentrate on promoting conversations on climate actions and not only on political negotiations, as is traditionally the case in the PreCOPs. The idea is to innovate and have a non-conventional PRECOP,» explained Environment and Energy (MINAE) Carlos Manuel Rodríguez.

In this regard, the event will be divided into two parallel spaces: PreCOP Negotiation and PreCOP Forum. The latter will include the participation of the private sector, local governments, communities and civil society.

Minister Rodríguez also explained that the agenda should focus on three axes: sustainable cities-mobility; solutions based on nature; and the blue economy. Likewise, in two cross-thematic areas: gender and human rights, and financing.

This proposal from Costa Rica is linked to and inspired by the Decarbonization Plan (2018-2020), presented by the Alvarado Quesada Administration last February, and which placed the country as a world pioneer in this transition towards a green economy.

The PreCOP and the COP will be important spaces to visualize and promote the work that Chile and Costa Rica have done for decarbonization, and to consolidate Latin American leadership in the global agenda of Climate Change. 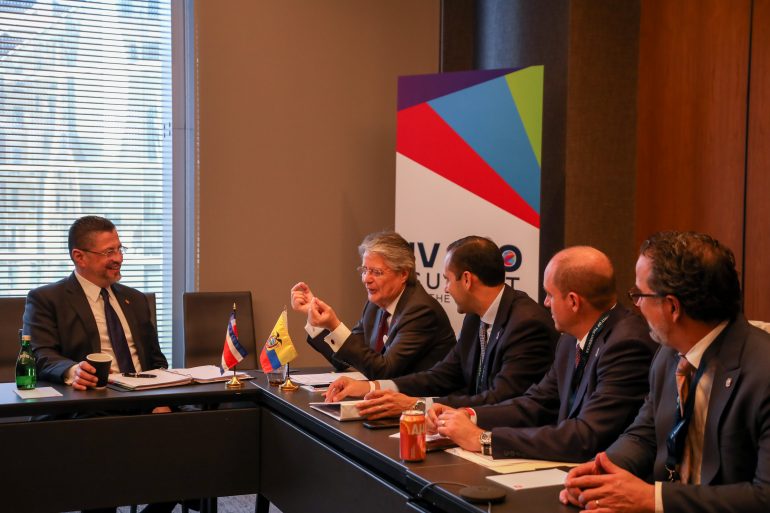